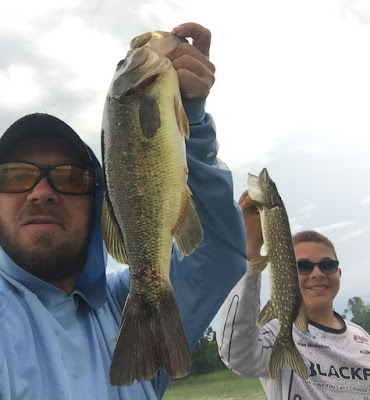 In sprinkled just for a second as I was backing the boat out. I went and picked up Jaimen and headed to South Point Small Island. Jaimen caught a pike I think. I missed a bite on the craw tube because I was moving towards the bite. We then headed to the intersection. Didn't get a bite on the point. So we headed to the SW R/R line. Jaimen got the first bass of the morning there on Grapes of Wrath. He lost a couple bass. We got to the juice and commenced to whack 'em on frogs, jigs, and craw tubes. Unfortunately, we didn't convert on the bigger bass. Jaimen caught the big fin in the sparse rice toward the back. When the fish were finally done we worked back around the Intersection. I was totally unprepared when a 17/18 smoked my frog on the backside of the point reeds.  My hand was nowhere near the reel handle. I worked us all the way into the thick reedline.  I don't remember if we caught anything or not. The rain stayed to the South of us.

We went back into Platte and worked the rice in Channel Inn Bay. I got the big bass of the morning before the 1st boat channel.  It was pretty much dead in CIB except for a few pike.  Dad called me and informed me it was Ruby's day, so I dropped Jaimen off and headed in. 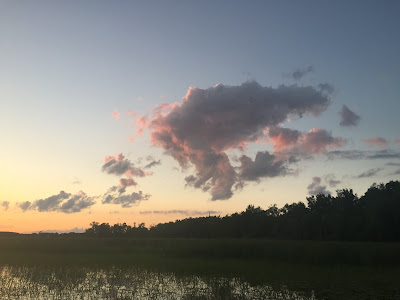 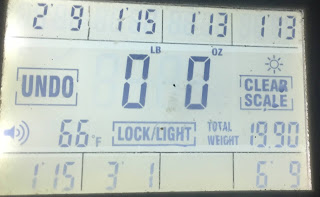 Due to the rents going to Pierz I got a late start tonight. I missed a couple topwater hits and a couple hits on the craw tube catching one little bass on the Craw Tube. I then went across from the Access in Platte.  There was a net set out there beyond the reeds. I went to the shallow edge of the cane. There was baitfish activity, but I was disappointed in the bite.  I got one dink on the craw tube and a 14-incher and the 17.25" on Bobby's Perfect. I also had a good fish miss the BP where I got the 17-incher.  I threw back with craw tube and had something that felt smaller pick it up that I had on for a few seconds before it came off.  The skeeters get pretty fierce around 9:45PM or so.
Posted by Basspastor at 2:57 AM