The Report:I started by hitting the first dock to the West of the lake place. Nothing. I then continued in that direction and had a hit, missed it. In fact as I kept going that direction I missed the first 5 hits I got. Visions of another skunk were running in my head until I got this dude on a spinnerbait. 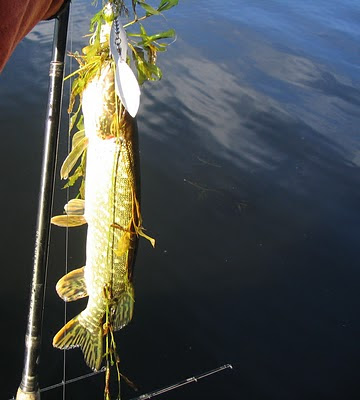 I fished the last 3 docks on the South Shore of the Big Middle Bay. That wasn't happening and it was coming up on 6PM and I needed to make a move. I decided to go to the South shore of Platte just to the SE of the small island. I don't think I've fished in this area for at least 3 years. I started out on the weed flat fishing in extremely sparse reeds. I managed to catch one small pike out there on a white Monsoor Swim Jig with pearl essence 5" Action Plastic Super Mag Grub. I worked my way West and towards shore eventually getting to a thicker reed bed. I was working my way around those thicker reeds throwing the swim jig when I got on the lake side where the reeds thinned out considerably. I made a cast by a couple of isolated reeds and I got hit, then hit again, then on the third hit the fish hooked up. I fully expected it to be a pike, but it was this 14.25" bass. 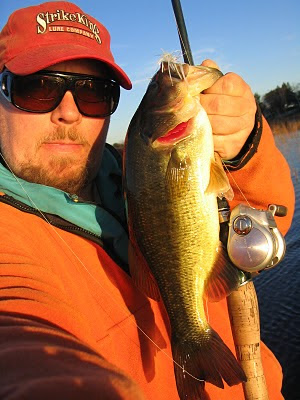 The end of the tail got bit off the grub, but I cast it right out over the same spot and had another bass on that was the same size jump off right at the boat. I cast back to the spot again and got a 13.50" largie. I decided to give the Repo Man a try and it took a couple of casts, but I got 13.50" on that. Then nothing, so I tried the swim jig and nothing. I cast a junebug crawtube to the spot and got bit, but I missed on the hookset. Same thing on the next cast. On the third try I got a 14.75" and that was it. I tried throwing a few more things and it seemed the bite ended. I put a new Super Mag Grub on the swim jig. I cast over the hot spot from a different angle and had a hit that didn't hook up. Cast back a couple of times more and nothing. I then cast back with the crawtube and got a 13.75" and 14.25" on consecutive casts and that seemed to be it for the spot.

It was now about 6:50PM and getting dark quick, and I made the decision to fish the point that comes off the South tip of the small Island. It was a good call. I smacked this 17.5", obviously on the Repo Man. 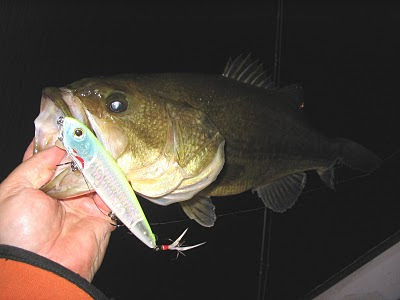 A couple of casts later a 17.25" largie just lit up the Repo Man right after it landed. I had one more blow up on the Repo Man but it didn't hook up and it didn't come back for seconds. As it was getting dark I moved the boat off the end of the point and was casting over the tip before the drop off with a white single white Colorado blade spinnerbait when I got the last bass of the night, which was 14".

It looks like the secret to catching bass on Platte right now is to find a pod of fish. Easier said than done as the previous two days of no bass proves. I'm not sure what was so special about that one little area to give up so many fish. I plan to go back there tomorrow and try it again and GPS it.
Posted by Basspastor at 11:54 PM

Nice! That was a decent catch...